The temperatures in Tennessee this past month have been frigid! It’s a perfect time for learning about ice. At Learning Zone preschools in Murfreesboro TN, we will be focusing on winter weather in our Learning Expeditions during January and February. You can have some fun with winter weather science at home too. 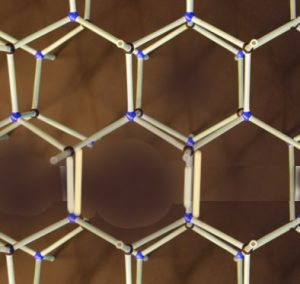 Ice isn’t just “frozen water,” you know. Ice is made up of crystals. Regular ice has a structure of repeating hexagonal-shape crystals as shown here.

Here’s an experiment you can do with ice. You’ll need:

First explain to your child that tap water has “things in it” that you can’t see (impurities), but distilled water does not. Then fill both containers to the top and put them in the freezer. The water will freeze fairly quickly, so check on the containers every half hour or so. The result should be that the distilled water will freeze with spikes in it. Once the spikes get started, continue to leave the containers in the freezer so the spikes will get bigger.

Note: You don’t see spikes in nature because water in nature has impurities in it. So, like tap water, it freezes evenly.

Learning Zone Child Care is one of the leading preschools and daycares in Murfreesboro, TN. We currently have 2 brand new preschool locations in the Murfreesboro area. Please click on either location listed below to learn more or click here to schedule a tour and request information.

For questions regarding pricing and enrollment availability please fill out our information request form.

Do you have a heart for children and an interest in working at one of our Learning Zone locations?

Already attend Learning Zone? We love to get feedback about our program.

Ready to Learn More About Enrollment, Pricing and Tours?